The house that Tony Soprano called home is listing for sale 20 years after its television debut.

The roughly 5,600-square-foot home in North Caldwell, N.J., where America’s favorite fictional mobster scooped up his morning newspaper and swam with ducks, is being listed for sale by the owners, Patti and Victor Recchia, at a “starting price” of $3.4 million. Set on a 1.5-acre lot, it includes the main house with four bedrooms, four full bathrooms and a powder room; two two-car garages; and a detached one-bedroom guesthouse. The property taxes are $34,005 a year.

The price is ambitious for a neighborhood where comparable homes have sold for between $1.5 million and $2 million, according to Zillow. But Mr. Recchia, 65, the owner of Fourth Generation Construction, which built the house, as well as more than 20 in the development where it’s located, said the value exceeds the brick and mortar.

“Those things can be quantified,” said Mr. Recchia, “but I don’t think you can quantify the intrinsic value of this home.”

The house, where Tony Soprano pulled into the long, curving driveway in the opening credits of “The Sopranos,” was both a frequent filming location and the inspiration for a meticulous replica of the interiors at Silvercup Studios in Queens, N.Y.

The cabinetry may have been updated, but the home’s kitchen is still recognizable to fans of the show, who watched much of the series’ domestic drama unfold there.CreditStefano Ukmar for The New York Times 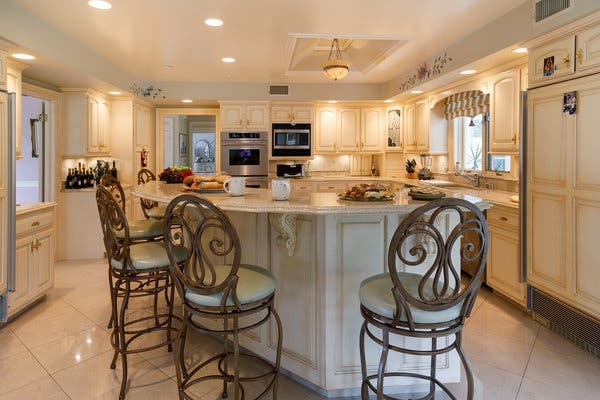 The cabinetry may have been updated, but the home’s kitchen is still recognizable to fans of the show, who watched much of the series’ domestic drama unfold there.CreditStefano Ukmar for The New York Times

Scenes in the pilot episode were filmed in the home’s kitchen, where viewers first met Tony’s long-suffering wife, Carmela, and their children, A.J. and Meadow. Tony, the sullen gangster with mommy issues, waded into the backyard pool with a family of ducks and had a panic attack on the patio in the same episode.

While later indoor scenes were mostly filmed on a Silvercup soundstage, the production crew returned to the Recchias’ home year after year for exterior shots. So do some die-hard fans.

“I was pulling out of the driveway and I noticed a few fellas on their motorcycles coming down the cul-de-sac,” said Ms. Recchia, about a recent interaction. “So I open my car window just to acknowledge them, and they say, ‘Hi, Mrs. Soprano! We’re not going to mess anything up, just want to take a couple photos.’”

“They’ll pull up in like a limo or something, get out in a robe, and pick up a newspaper,” said Mr. Recchia, who encountered a father and son who said the photo op was part of a Father’s Day present.

An unofficial Facebook page for the house has more than 1,200 “visits” at the address, along with dozens of selfies by grinning fans posed in front of the driveway. When the actor James Gandolfini, who played Tony, died suddenly in 2013, fans left flowers, candles and a bag of dried ziti near the curb.

The house was one of 150 considered for the Sopranos’ home, Ilene S. Landress, a producer for the series, told The New York Times in 2002. “And from then on, the Recchia house determined the look of everything,” she said, while noting that the couple’s real décor was far more tasteful.

Today the home, which was built in 1987, has undergone some cosmetic changes, but retains much of what made the property a character in its own right. Gone are the pickled oak cabinets in the kitchen that defined a certain vision of late 1990s suburbia, but the long kitchen island that anchored the show’s domestic drama still stands.

The great room has an octagonal vaulted ceiling, a white stone fireplace, and matching sets of French doors that lead out to the frequently filmed patio, which has a cabana and access to the guesthouse.CreditStefano Ukmar for The New York Times 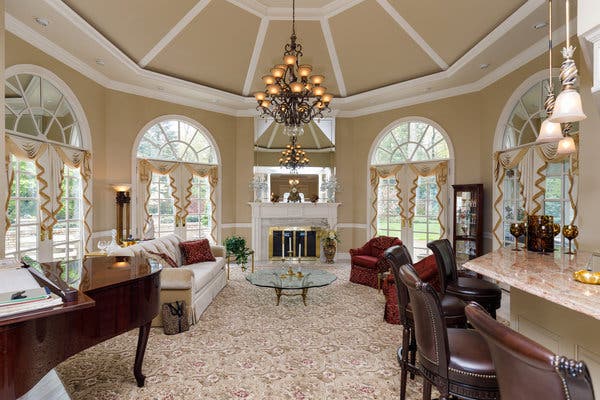 The great room has an octagonal vaulted ceiling, a white stone fireplace, and matching sets of French doors that lead out to the frequently filmed patio, which has a cabana and access to the guesthouse.CreditStefano Ukmar for The New York Times

In the dining room, with pink wallpaper and a grand tray ceiling, Carmela, played by Edie Falco, once pulled an assault rifle from inside a decorative column on the wall, because she thought someone was “jimmying a window.” It turned out to be her teenage daughter, Meadow, trying to sneak into the house through her bedroom window.

The great room, with an octagonal vaulted ceiling, a bar and a white stone fireplace, has matching sets of French doors with gold-trim curtains that lead out to the frequently filmed patio, which has a cabana and breezeway access to the guesthouse.

This was also the Recchias’ home for 32 years, and the real and imagined converge in all corners of the house. In the family room, with a skylight and green carpet, is a tall promotional poster for “The Sopranos,” signed by the actors and crew. Over six seasons, the crew used the property somewhere between 30 and 50 times, the couple said. They declined to say how much they were paid for use of the space.

On a recent tour, Mr. Recchia played home videos of the cast filming the pilot episode in his kitchen. In another video, Mr. Gandolfini joked poolside about not wanting to leave. “I’ll be here every Thursday at 7,” he said with a smile.

As the show became a critical darling and commercial juggernaut for HBO, the Recchias hosted still more celebrities. There was Steve Buscemi, who played Tony Soprano’s cousin, Tony Blundetto, and also directed some episodes. Annie Leibovitz, the famed photographer, shot a portrait of Mr. Gandolfini looking somber in the sitting room. Yogi Berra, the legendary Yankees catcher and manager, swung by once to watch the filming. “The crew was mesmerized,” Ms. Recchia said.

The Recchias are selling because their adult son moved out many years ago and they don’t need as much space. They plan to stay in New Jersey.

The patio and backyard, where Tony Soprano had panic attacks and communed with ducks. CreditStefano Ukmar for The New York Times 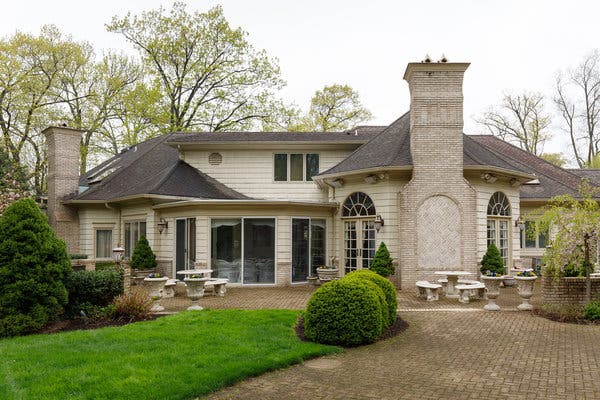 The patio and backyard, where Tony Soprano had panic attacks and communed with ducks. CreditStefano Ukmar for The New York Times

Because the couple eschewed working with a real estate agent on the sale, Mr. Recchia is asking qualified bidders to submit offers and proof of funds by June 21 to the email address sopranoshouseforsale@gmail.com. They are bracing for a flood of emails, but said they believe this is the best way to market a home with this kind of cachet.

As for the price, he believes the home has more in common with movie memorabilia or exotic cars than it does with other houses.

Perhaps the right buyer will feel the same way. On a recent morning, a Maybach with tinted windows was parked outside the Recchias’ home. As another car approached the cul-de-sac, the unseen driver sped off.